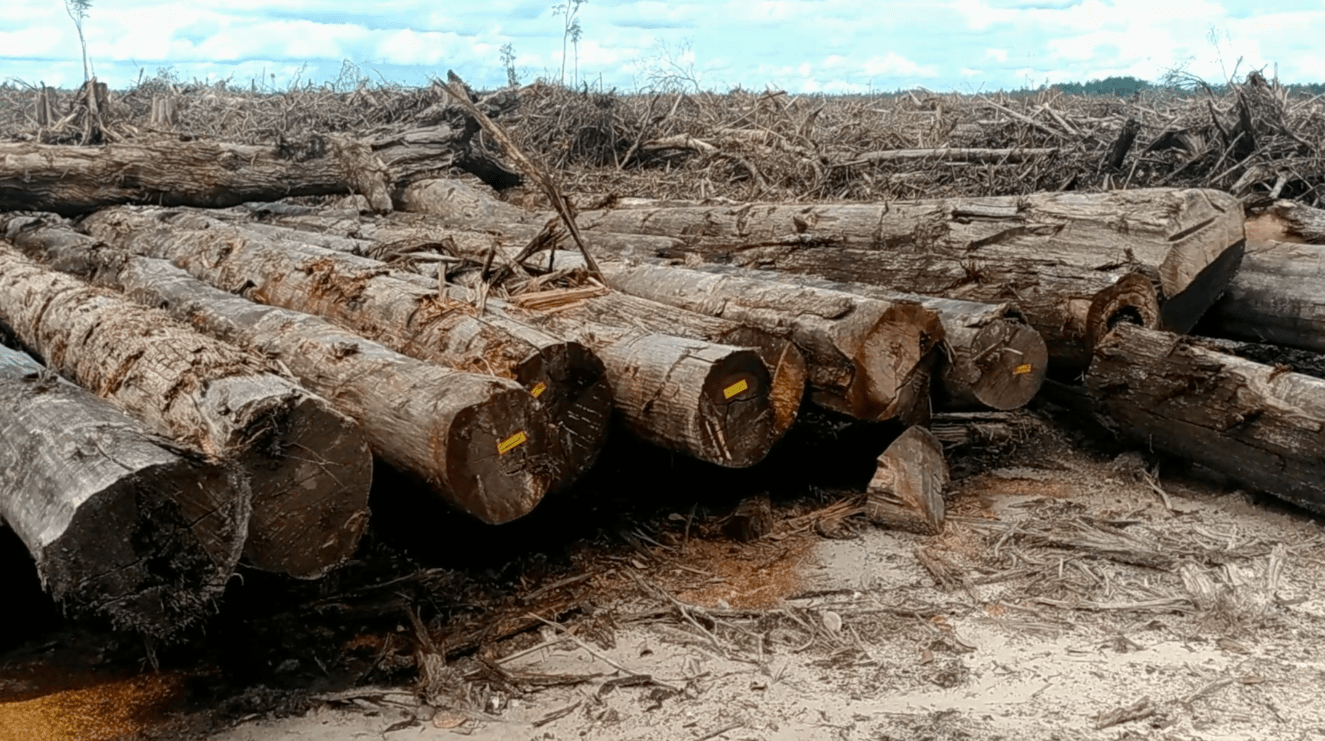 Recent analysis by AidEnvironment identified the ten largest deforesters for industrial timber in Indonesia in the second quarter of 2022.

Collectively, these ten concessions cleared 7,000 ha of forest, peat and peat forest between April and June 2022. Four out of five biggest deforesters in the first quarter of this year also appear in this period’s list.

The ten largest deforesters in the second quarter of 2022:

Alas Kusuma holds Forest Stewardship Council (FSC) certificates via its two subsidiaries, PT Sari Bumi Kusuma and PT Suka Jaya Makmur. However, the group has been among the most significant deforesters in the Indonesia’s industrial forest sector within the last few years. From 2020 to 2021, they cleared 8,100 ha of forest within PT Mayawana Persada.

Nusantara Fiber is an opaque company operating mostly in Central, East, and West Kalimantan. Between April and June, the company cleared 1,800 ha of forest on its PT Industrial Forest Plantation in Kapuas, Central Kalimantan.

Nusantara Fiber also appeared in the top industrial concession deforesters list in the first quarter of 2022 and the company has cleared 2,300 ha since the beginning of this year. PT Industrial Forest Plantation’s concession has a total area of 101,800 ha. Most of the area is the habitat of the Bornean orangutan. AidEnvironment analysis found the concession contains 51,026 ha of orangutan habitat.

The Nusantara Fiber group has been among the largest deforesters in Indonesia’s industrial forest concessions in the last few years. In 2020 and 2021, the group cleared 10,200 ha of forest on PT Industrial Forest Plantation and two other concessions it operates in Kalimantan: PT Bakayan Jaya Abadi and PT Santan Borneo Abadi. 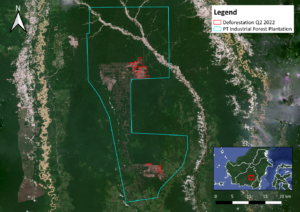 PT Adindo Hutani Lestari overlaps the Nunukan, Malinau, Tanah Tidung, and Bulungan districts in North Kalimantan. In the second quarter of 2022, Aidenvironment detected 500 ha of forest clearing within the company’s concession. The company is allegedly connected to Sukanto Tanoto, the ultimate beneficial owner of Royal Golden Eagle. PT Adindo Hutani Lestari is also among the open market suppliers to APRIL.

PT Adindo Hutan Lestari has long been linked to deforestation. A report by the Indonesian NGO Auriga Nusantara in 2020 showed that between June 2015 and August 2020, PT Adindo Hutani Lestari cleared more than 7,000 ha of forest within the concession. This made the company non-compliant with the policy of its major buyer, APRIL. APRIL responded to the report in a public post, rebutting Auriga’s accusations and claiming that PT Adindo Hutan Lestari operated in compliance with its High Conservation Value (HCV) assessment. However, the HCV assessment report for the concession is not listed in the HCV network website, and it is not clear if the assessment has undergone the necessary peer review. 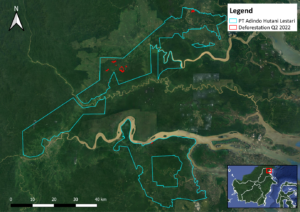 In the fourth position is PT Borneo Utara Lestari, an industrial forest concession in Nunukan, North Kalimantan. The company cleared around 330 ha of forest during the second quarter of 2022. PT Borneo Utara Lestari was previously owned by the Fangiono family through FAP Agri. In January 2021, FAP Agri sold its share to PT Tjipta Sejati Abadi, owned by an individual named Santri Febriani. There is little public information about Santri Febriani, except some references mentioning that they worked as the HR manager at the Fangiono family-controlled First Resources. There is currently an ongoing investigation by Roundtable of Sustainable Palm Oil (RSPO) regarding the ownership links between First Resources, FAP Agri, and Ciliandry Anky Abadi.

In fifth place is PT Bukit Raya Mudisa, who cleared 320 ha of forest between April and June 2022. Located in West Sumatra, the company is owned by Bintang Utama Lestari, a company that is affiliated with Royal Golden Eagle.

PT Bukit Raya Murdisa is a long-term partner of APRIL. PT Bukit Raya Murdisa has conducted an HCV assessment and the report has been peer-reviewed and listed on the HCV website. The report was prepared to comply with APRIL’s zero deforestation commitment. According to AidEnvironment’s analysis, the clearing took place in the HCV and HCS areas identified in the report. Thus, the clearing was in violation of APRIL’s no-deforestation policies.

PT Taiyong Engreen cleared 235 ha of forest between April and June 2022. This is in addition to the 4,900 ha of deforestation on the concession that AidEnvironment detected between 2016 and 2021. PT Taiyong Engreen is the industrial forest concession with the third largest amount of forested orangutan remaining, at 41,609 ha.

PT Taiyoung Engreen is majority owned by the Korean company Talyoung, of whom little is known. It is partially owned by Jhonlin Group, a company belonging to Haji Andi Syamsudin Arsyad (commonly known as Haji Isam). The group also owns palm oil businesses and has a longstanding history of violating NDPE commitments. Since 2018, Jhonlin Group has consistently been among the largest deforesters in the palm oil industry. Around 11,900 ha of forest and peat was cleared within the group’s oil palm concessions between 2018 and 2020.

PT Tusam Hutani Lestari is in Aceh. The company cleared approximately 185 hectares between April and June 2020. Forty percent of the company’s shares belong to PT Inhutani IV, a state-owned company. The remaining shares are owned by PT Alas Helau. The majority of PT Alas Helau’s shares are owned by Fayola Investment Limited. Several news articles link Fayola Investment Limited to Prabowo Subianto. The company is registered in Mauritius. Prabowo Subianto previously ran for presidential candidacy in Indonesia in 2014 and 2019. He is now acting as the Minister of Defense to the Republic of Indonesia.

PT Hutan Produksi Lestari has been consistently clearing forest since 2020. Between April and June 2022, the company cleared 130 ha of forest. PT Hutan Produksi Lestari is owned by Iman Hartono and Willem Alexander Hartono and located in Kapuas, Central Kalimantan. The two businessmen also own a wood processing company in Karanganyar district of Central Java province, PT Prima Parquet Indonesia. According to Indonesian export data in 2020, the wood processing company exported plywood to companies in Singapore, Malaysia, and South Korea.

PT Hutan Produksi Lestari operates a total of 10,500 hectare of concession. Most of the concession falls under the orangutan habitat . In 2020 and 2021, the company cleared 1,500 ha of forest.

PT Intraca Hutani Lestari is part of PT Central Cipta Murdaya/Hardaya Group. A total of 100 ha of deforestation was detected within the company’s concession in the second quarter of 2022. Hardaya Group is a significant deforester in Indonesia’s industrial forest plantations industry. The group cleared 2,300 ha of forest in between 2016 to March 2021. Hardaya Group also owns a wood processing company called PT Intracawood Manufacturing. The manufacturing facility holds a FSC certificate.

Hardaya’s palm oil business also was scrutinized in a Greenpeace report in 2018. The report published information on the 434 ha of deforestation by Hardaya Group within its oil palm concessions between 2014 and 2018. In 2017, the company group also cleared at least 666 ha of forest in Nunukan, North Kalimantan for oil palm plantation development.

A report by Forest People in 2017 said that PT Bangun Rimba Sejahtera used to supply to Asia Pulp and Paper (APP). APP is a giant pulp and paper company owned by Sinarmas Group.