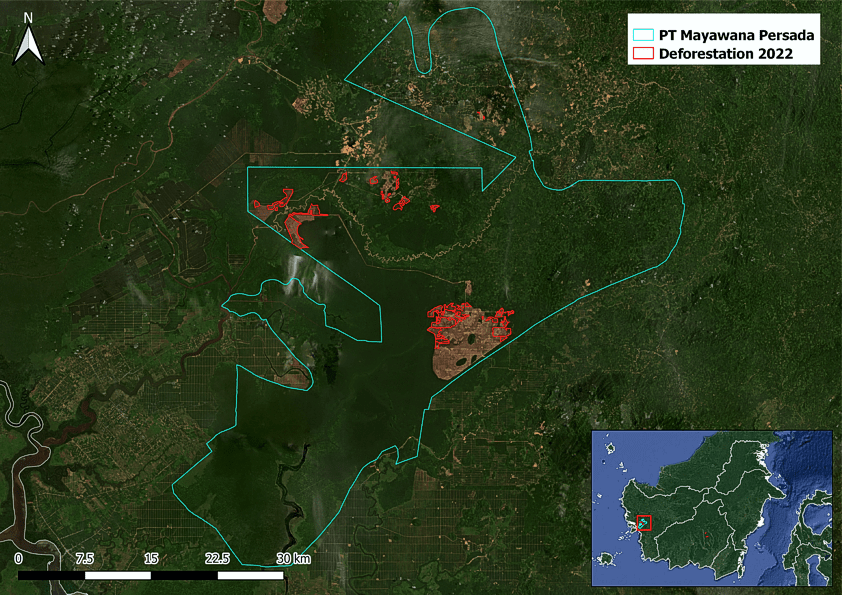 From January to March 2022, Aidenvironment detected around 2,200 ha of forest clearing within Alas Kusuma’s PT Mayawana Persada’s concession. Despite having Forest Stewardship Council (FSC) certificates via its two subsidiaries, PT Sari Bumi Kusuma and PT Suka Jaya Makmur, Alas Kusuma has been one of the most significant deforesters in Indonesia’s industrial tree sector in the last few years. Within the span of two years, from 2020 to the end of 2021, 8,100 ha of forest was cleared on the concession. From the continued clearing in the first quarter of 2022, it is likely that clearing will continue unless a stop-work order is immediately put in place.

Among the prominent buyers of Alas Kusuma’s plywood is Itochu Corporation. Aidenvironment reached out to Itochu Corporation about Alas Kusuma’s deforestation issues and the need for Itochu to implement a sustainability requirement for its third-party suppliers. Itochu replied: “we have engaged with Alas Kusuma and confirmed that it sources 100% FSC plywood both from internal and external suppliers since Dec. 1st of 2021…ITOCHU have confirmed no clearing forests done by Alas Kusuma who is committing to FSC principles that prohibit such activities.” Further follow-up questions about how ITOCHU had verified the lack of deforestation in the face of the evidence were not answered.

The only official website found for Alas Kusuma or its subsidiaries is for PT Sawit Jaya Makmur. The website mentions its high conservation value (HCV) forest within the concession and the company’s commitment to manage the area sustainably. There is no information about how the company manages its HCV areas or any HCV areas in the wider company. Aidenvironment has not been able to make contact with Alas Kusuma.

Nusantara Fiber is an opaque company operating industrial tree concessions in Kalimantan, mostly in Central, East and West. The first quarter of 2022 saw 480 ha of deforestation within PT Industrial Forest Plantation’s concession in Kapuas, Central Kalimantan. The group, through various ways, has connections to Indonesia’s giant pulp and paper company Royal Golden Eagle (RGE), although RGE have denied any association.

Nusantara Fiber has consistently been one of the largest deforesters in Indonesia’s industrial tree sector. In 2020 and 2021 combined, the group cleared 10,200 ha of forest in three of its operating industrial tree plantations concessions: PT Bakayan Jaya Abadi, PT Industrial Forest Plantation, and PT Santan Borneo Abadi.

To date, Aidenvironment has not been able to engage directly with Nusantara Fiber. Our engagement with companies and NGOs in the wider landscape has also highlighted the opaque nature of the company; Nusantara Fiber is not universally recognized as the official group name, with some referring to “Santan Borneo Abadi” as the group’s name, and others “Permata Borneo Abadi”.

In October 2021, Aidenvironment covered PT Hutan Produksi Lestari in a news item regarding the company’s deforestation activities, which took place in an area of official orangutan habitat.  PT Hutan Produksi Lestari then transpired to be the fourth largest deforester in Indonesia’s industrial tree plantation sector in 2021. Between 2020 to 2021, at least 1,500 ha of forest clearing was detected in the concession. The clearing has continued, with satellite imagery showing around 110 ha of forest between January to March 2022.

Aidenvironment has reached out to PT Hutan Produksi Lestari, which is owned by two individuals, namely Iman Hartono and Willem Hartono, for comment. The company acknowledged that the concession is currently being cleared to prepare land for the planting of industrial trees.

Jhonlin Group has been one of the most prolific deforesters in both the industrial tree and palm oil sectors in the last few years. More than 8,000 ha of forest was cleared within Jhonlin’s industrial tree concessions between 2016 and 2021, and the clearing has continued in 2022. Aidenvironment has detected 100 ha of clearing within PT Taiyoung Engreen in Gunung Mas, Central Kalimantan in the first quarter of this year. Jhonlin owns 30% shares in PT Taiyoung Engreen, and the majority shares – which constitutes for 40% of the stakes – owned by Korean company Taiyoung. Jhonlin Group is owned by Haji Andi Syamsudin Arsyad, a businessman from Kalimantan more commonly known as Haji Isam. Haji Isam is famous for its several businesses, including coal mining and sugarcane, and despite being a controversial figure, is close to Indonesia’s president, Joko Widodo. Jhonlin Group owns three other industrial concessions whose shares are majority owned by Jhonlin: PT Jhonlin Agro Mandiri, PT Inni Joa, and PT Kodeco Timber.

PT Toba Pulp Lestari is listed on the Indonesian Stock Exchange. The company is linked to RGE via RGE’s ultimate owner Sukanto Tanoto, who has significant stakes in the company. Aidenvironment has argued that the two companies would fall under the Accountability Framework Initiative’s group definition, where two companies are controlled by the same person. However, RGE has rejected the allegation, referring to Tanoto’s ownership in PT Toba Pulp Lestari as “a pure financial investment as one would have in any public listed company”. PT Toba Pulp Lestari also provided a similar statement, stating that PT Toba Pulp Lestari and Royal Golden Eagle are under different independent board and management team, thus should be treated as two different groups.

For more information, please feel free to reach out to Chris Wiggs.

Four Indonesian pulp and paper companies responsible for 11,000 hectares of forest loss in 2021

Just four pulp and paper companies in Indonesia were responsible for 11,000 hectares of forest clearing during 2021, analysis by AidEnvironment shows. The figure is similar to Indonesia’s 2020’s deforestation figures, when five companies were responsible for 13,000 hectares of forest loss. The four groups clearing the most forest in 2021 were Alas Kusuma, Nusantara Fiber, Moorim Group and PT Hutan Produksi Lestari. Nusantara Fiber and […]

Deforestation: is there too much focus on palm oil?

While palm oil companies are considered ahead of other sectors in no-deforestation implementation, AidEnvironment uncovered that non-palm deforestation persists in sustainable palm oil supply chains.

AidEnvironment celebrates Earth Day with a new content series, ‘Insights from the field’

The first in a special content series featuring stories from the ground from our programs in Indonesia, Uganda and the Philippines.