Four Indonesian pulp and paper companies responsible for 11,000 hectares of forest loss in 2021 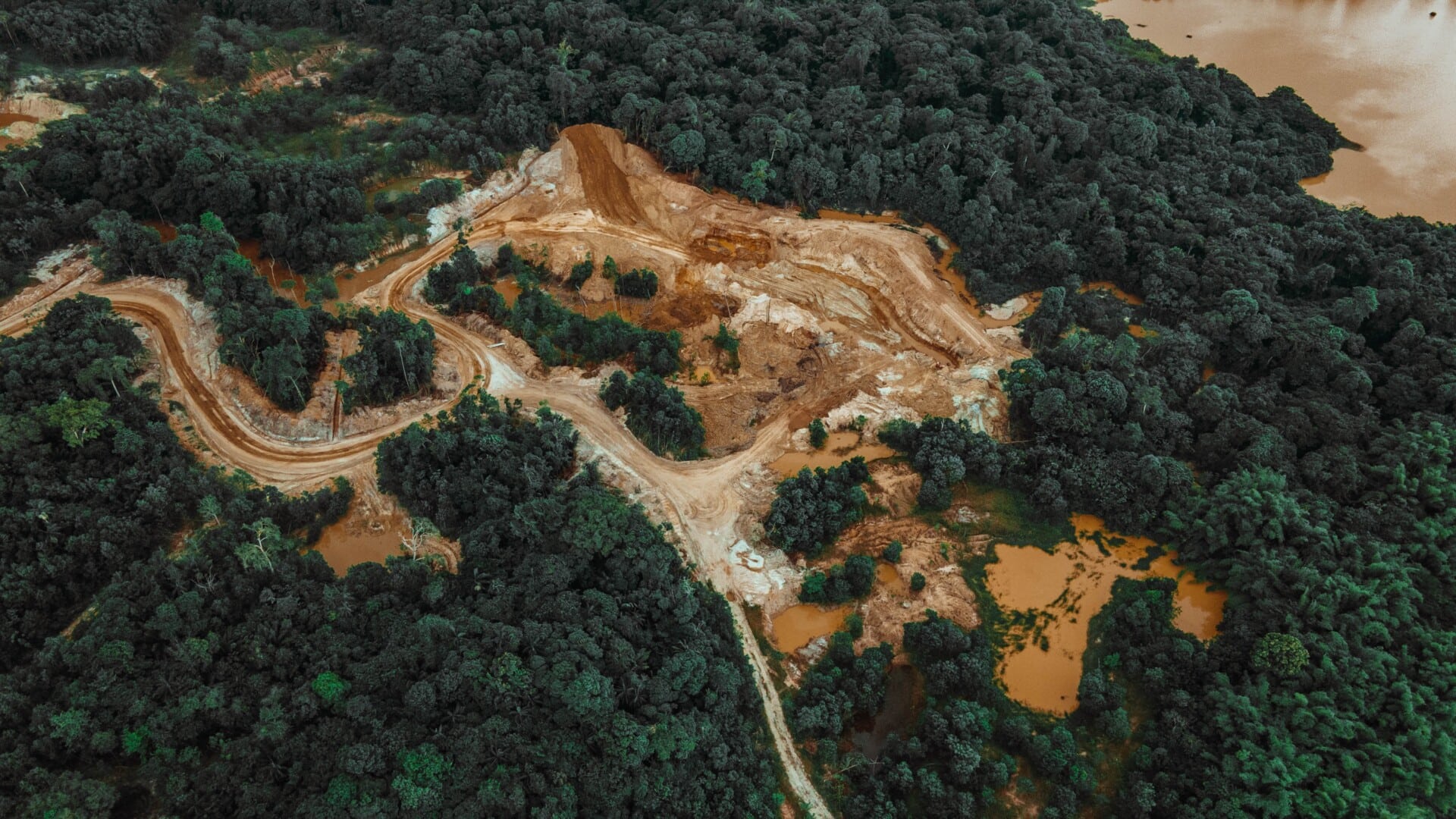 Just four pulp and paper companies in Indonesia were responsible for 11,000 hectares of forest clearing during 2021, analysis by AidEnvironment shows. The figure is similar to Indonesia’s 2020’s deforestation figures, when five companies were responsible for 13,000 hectares of forest loss. The four groups clearing the most forest in 2021 were Alas Kusuma, Nusantara Fiber, Moorim Group and PT Hutan Produksi Lestari. Nusantara Fiber and Alas Kusuma were the biggest deforesting companies in 2020.

The Alas Kusuma group cleared 2,800 ha of forest in 2020, making it the second largest deforester in Indonesia’s industrial tree sector. In 2021, continued deforestation saw it overtake Nusantara Fiber to become the largest deforester. It cleared 5,300 hectares of forest, all inside PT Mayawana Persada’s (MP) concession in Ketapang and North Kayong districts of West Kalimantan. The forest being cleared is habitat of the Critically Endangered Bornean orangutan (Pongo pygmaeus), although PT MP has denied this and claims to have conducted studies to prevent this. However, these studies are not publicly available.

What is especially striking is that despite repeated coverage of PT MP’s deforestation throughout 2021, Alas Kusuma continued clearing; 2,200 hectares of the deforestation occurred during the last two months of the year. 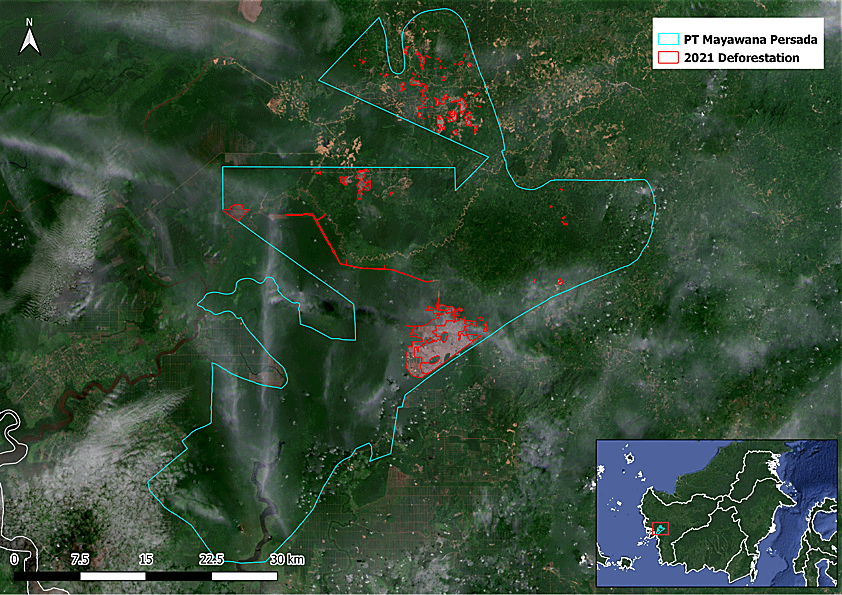 After its acquisition of another plantation company in 2021, PT Permata Borneo Abadi, the Nusantara Fiber group has industrial tree concessions totalling 291,000 hectares in Kalimantan. The company started its forest clearing activities in 2016, and by October 2020 it had already deforested 26,000 hectares for the planting of industrial trees.

PT IFP is the largest plantation company with 101,800 hectares in Kapuas district, Central Kalimantan province. More than 50,000 hectares of forests are still at risk of being cleared by PT IFP in the near future, as these are not part of its designated protected area. Most of the area is orangutan habitat.

The Nusantara Fiber group has undisclosed owners. Known to be involved however are the Hong Kong-based company Argyle Street Management Limited (as investment manager) and the Malaysian company Acapalm Plantation Services Sdn Bhd (for plantation management). Nusantara Fiber is connected in various ways to the Royal Golden Eagle group of companies.

The third largest deforester is Moorim Group, a Korean company operating industrial tree plantations in Papua. Moorim’s subsidiary in Indonesia, PT Plasma Nutfah Marind Papua (PT PNMP), caused 1,500 hectares of forest loss during 2021. Moorim does not have an explicit NDPE policy, but the company strategy outlines a commitment to conduct “eco-friendly policies in accordance with ‘Low carbon and Green growth’ policy of governments”. Moorim holds a Forest Stewardship Council certificate for its forest management in Korea. In 2020, PT PNMP was involved in a social conflict with indigenous communities over a lack of compensation. In the period 2016-2020, the company cleared 3,200 hectares of forests. 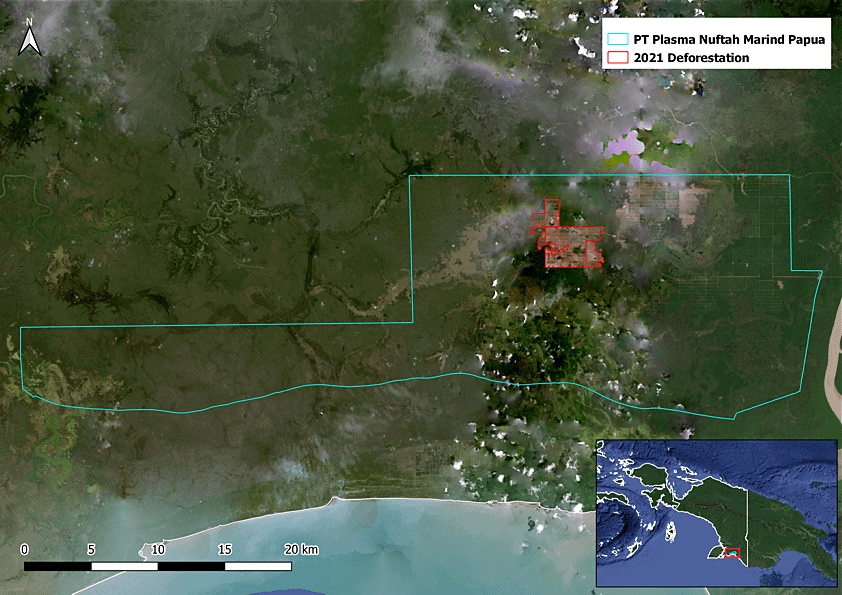 The Indonesian company PT Hutan Produksi Lestari cleared 1,000 hectares of forest in 2021. This makes it the fourth largest deforester for industrial trees in Indonesia in 2021. Since January 2020, the company has owned an industrial tree concession covering 10,050 hectares in Kapuas district, Central Kalimantan province. The concession falls within the habitat of the Bornean orangutan.

In 2020, approximately 800 hectares of forest was cleared on the same concession. PT Hutan Produksi Lestari is owned by the Indonesian businessmen Iman Hartono and Willem Alexander Hartono. They also own a wood processing company named PT Prima Parquet Indonesia, located in Karanganyar district of Central Java province. This company produces plywood and flooring. Indonesian export data from 2020 show that plywood was sold to companies in Singapore, Malaysia and South Korea. 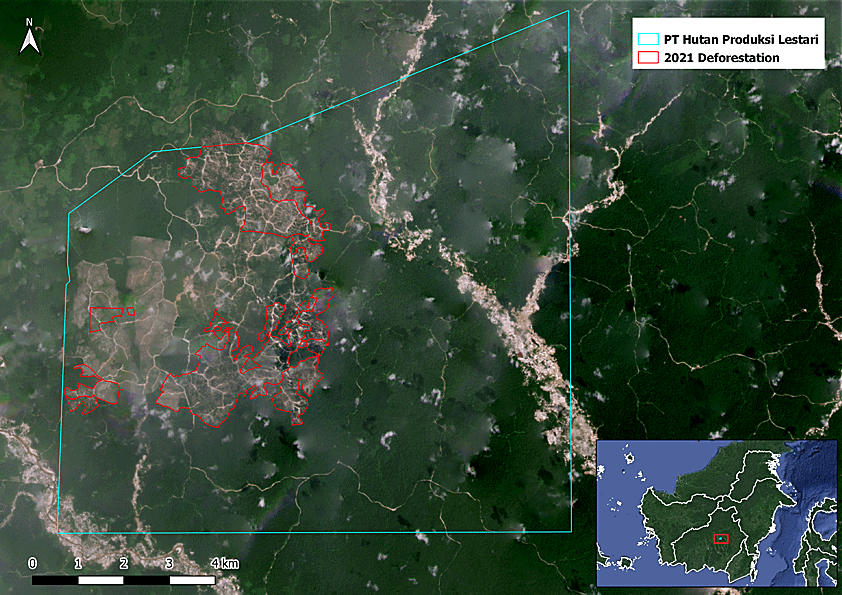