The origins of deforestation-risk commodities linked to the EU market

AidEnvironment’s deforestation-free supply chains team analyzed the trade flows of 98 commodity products, originating from non-EU countries and placed in the EU market in 2021. This is highly relevant in the context of the upcoming EU Regulation on deforestation-free products, that will require an in-depth understanding of the exposure of the EU and its 27 Member States to deforestation risks through global commodity trade.

For each EU27 member state, and for each commodity product, AidEnvironment can identify trade flows, major recipient countries, and key importers and exporters.

The 98 products covered under 11 different commodity groups (cattle, cocoa, coffee, maize, palm oil, poultry, rubber, sheep & goats, soy, swine, wood), were those listed in the European Parliament’s amended proposal of the Regulation, approved in the plenary in September 2022. Although not all these products will be covered by the EU Regulation for now, this analysis could already substantiate arguments for future additions to the scope of products covered. For instance, maize was one of the five most imported products by volume from non-EU countries in 2021 – more than 14 million metric tons of corn were imported by EU Member States in that year. The second largest supplier of the corn imported by the EU27 was Brazil, where deforestation associated with grain production, such as soy and maize, is well-documented. 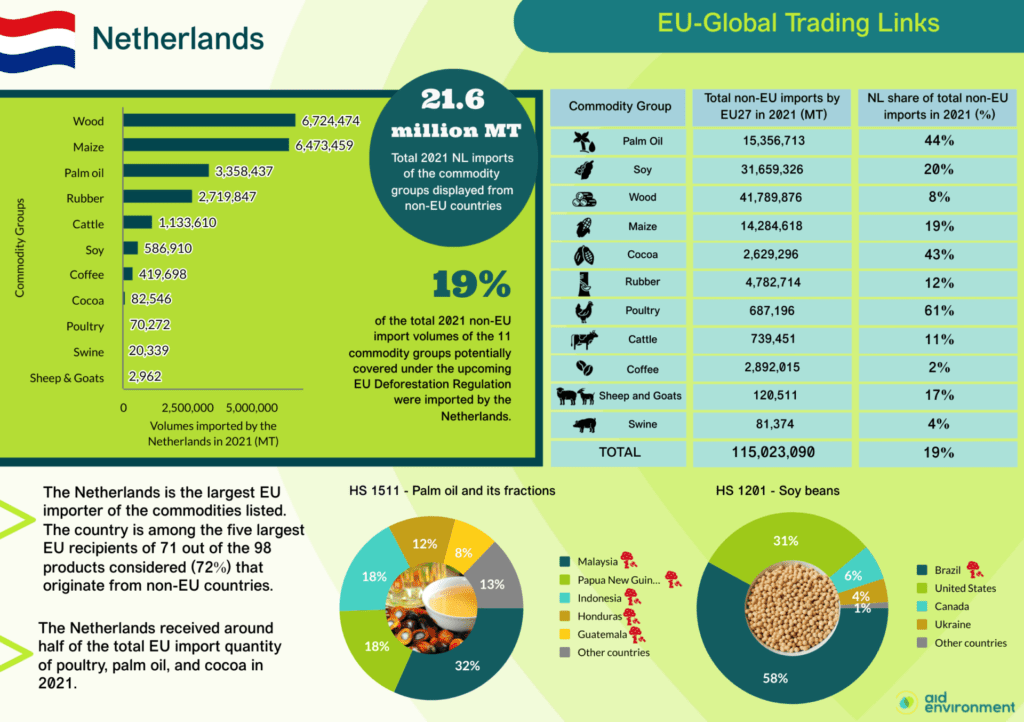 The analyses suggest that in 2021:

These analyses can also contribute to supporting a broader ecosystem scope in the EU Regulation. For instance, three of the most imported products by volume in 2021 into the EU market were tanned or crust hides and skins of cattle, soybeans, and soy oilcake, most of which originated from Brazil. A large share of these Brazilian products ending up in the European market are produced in Cerrado, where they are linked to the conversion of native vegetation. However, since “other wooded land” was not included in the definitions of the Regulation, more than 70% of the native vegetation of this biome will not be protected under the Regulation.

AidEnvironment is working with partners such as ClientEarth and IUCN NL to develop further content on EU27 Member States’ trading profiles, commodity origins, and trade flows to the EU.